Saffron Walden Hockey Club has launched a new RESPECT campaign. The distinctive design is used on posters and banners which will be displayed around the ground. The message is clear and simple - all members, players and spectators should make time to read it, please. 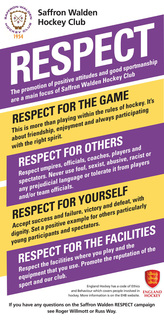 Respect for the game
This is more than playing within the rules of hockey. It's about friendship, enjoyment and always participating with the right spirit.

Respect for others
Respect umpires, officials, coaches, players and spectators. Never use foul, sexist, abusive, racist or any prejudicial language or tolerate it from players and/or team officials.

Respect for yourself
Accept success and failure, victory and defeat, with dignity. Set a positive example for others, particularly young participants and spectators.

Respect for the facilities
Respect the facilities where you play and the equipment that you use. Promote the reputation of the sport and our club.

England Hockey has a code of Ethics & Behaviour, which covers people involved in hockey. More information is on the EHB website.

If you have any questions on the Saffron Walden RESPECT campaign see Roger Willmott or Russ Way.

Find out about playing, umpiring, coaching or volunteering by submitting your details to our membership secretary or contacting any committee member.

Details of Data Controller are